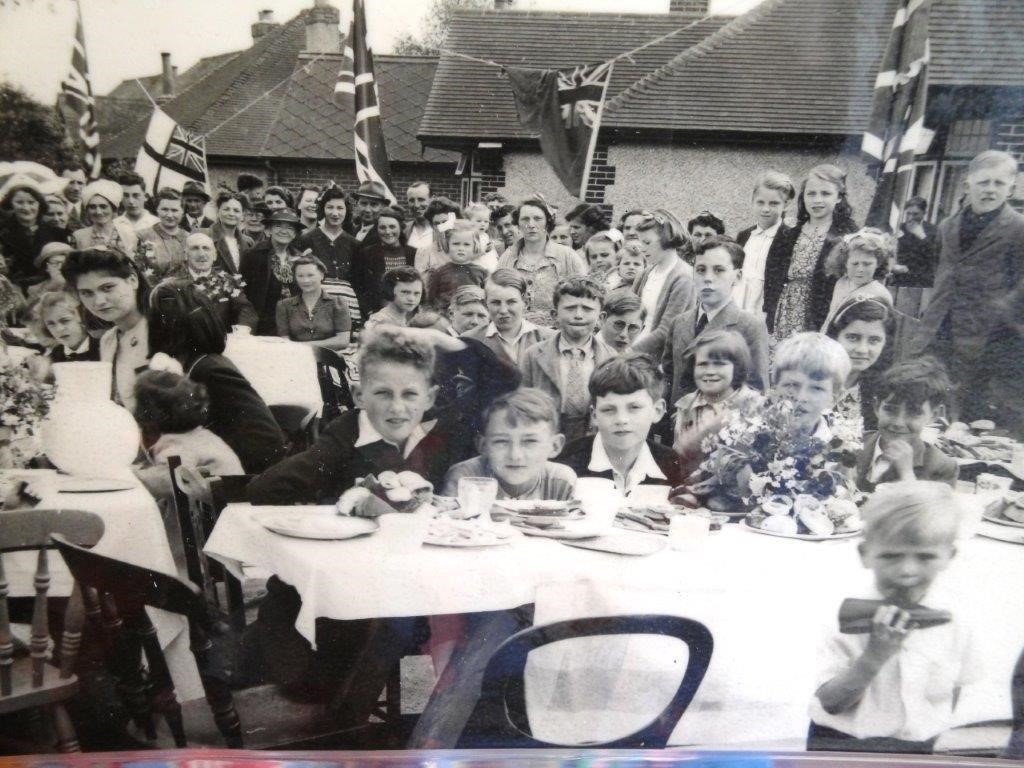 It was late in the afternoon of 7th May 1945 that the BBC interrupted its scheduled radio programmes to announce that Nazi Germany had signed the document of unconditional surrender and that the war in Europe would end at one minute after midnight the following day. That day, Tuesday 8th May 1945, was declared a national holiday and named Victory in Europe Day (VE Day).

The announcement set off jubilant celebrations across the country. Huge crowds gathered in London especially in Whitehall to hear Prime Minister Sir Winston Churchill speak and outside Buckingham Palace where Churchill joined King George VI, Queen Elizabeth (the late Queen Mother) and their children on the balcony to acknowledge the cheers of an estimated 100,000 people.

Such spontaneous outbreaks of relief and emotion were understandable after more than five years of war, but it was Churchill himself who sounded a note of caution in his radio broadcast : " we may allow ourselves a brief period of rejoicing, but let us not forget for a moment the toil and efforts that lie ahead". The war in Europe might be over but thousands of servicemen were still fighting in the Far East. The war against Japan would drag on for a further three months.

D-Day, 6th June 1944 just 11 months before VE Day, has been called the beginning of the end of the war in Europe. Lee-on-the-Solent played a pivotal role in the success of the Normandy landings. As well as the thousands of British, American and Canadian troops that lined local roads and cliff-lands awaiting embarkation to France, Lee Tower had become the headquarters of a special Anglo-American unit called CO-TUG (Combined Operations Tug Organisation).

This unit was responsible for organising the tugs that would tow the barges carrying the various sections of the Mulberry Harbours across the Channel to the Normandy coast. The waters off Lee were chosen as the main tug assembly area and a stores facility was set up on Lee Pier and on a depot ship moored close by. The viewing platform built before the war on the top of the 120 foot Lee Tower overlooked the assembly area and was the ideal control centre for the operation. In all 132 tugs took part on D-Day and in the following seven weeks some 1,000 successful tows were made across the ChannelAlso on D-Day, Lee's naval airfield HMS Daedalus made its most important contribution to the war. Used mainly up to that point for training Fleet Air Arm pilots prior to their deployment to fleet carriers, Daedalus now saw its own Seafire and Spitfire aircraft supplemented by RAF Spitfire and Typhoon squadrons, and also by US naval Spitfire and Canadian Mustang squadrons. Their task was to direct the fire of allied ships against German targets, to provide air spotting reconnaissance of enemy movements and to support the ships and the troops on the ground with air cover. On D-Day alone, 453 sorties were flown from Daedalus, the highest number achieved by any UK airfield on that day. By the end of June 1944 the total had risen to 2220 sorties.

Although there had been no air raids for at least nine months, it wasn't until VE day that some of the wartime restrictions were lifted. Shortages and rationing would continue for years afterwards, but the black-out ended, lights could now be switched on and the blast proof tape removed from windows. The barbed wire barricade preventing access to Lee beach would be removed soon afterwards. The sense of relief that the worst was over and the hope that life could return to normal sparked wild celebrations and impromptu street parties in Lee and all over the Borough.

The official proceedings for the Borough were held in St George's Barracks where the Mayor of Gosport, Alderman John Gregson, read the Victory Proclamation followed by a service of thanksgiving on St Vincent parade ground attended by the Bishop of Portsmouth and Armed Forces chiefs where prayers were said for men still fighting in the Far East in the ongoing war against Japan.

After the official ceremonies, the celebrations could begin. Sgt Vera Hoare of the Women's Auxiliary Air Force (WAAF) based at Grange Airfield described the local scene in a letter home: "There are bonfires all over the place, kiddies and grown-ups singing and dancing around them. Fireworks keep going up, there are signs everywhere THANK YOU BOYS, WELCOME HOME, GOD BLESS OUR KING. The searchlights are shining on all the ships, flares going up making a Victory sign.. Sirens going now. Is Europe really at peace once more?"

Street parties were held all over Lee; practically every street had one. A young resident at the time remembered that "it was a huge surprise to my mother when she was asked if she would let me present the flowers to someone posh who was coming to our street party. I have no idea who she was but it meant that I got to wear my best velvet frock". It was probably the Lady Mayoress who attended two Lee parties with the Mayor that day, one in Pier Street and the other in Elmore Avenue. The Hampshire Telegraph and Post reported that each child was given a flag, two oranges and a shilling.

Local historian John W Green, who was brought up in Anglesea Road, recalled "that the party for our immediate area was held in our garage. Well it was not really a garage because we.had no car. The bikes and tools were moved out, the walls and floor were washed down, and tables from various houses were set in the middle with sheets for table cloths". Just round the corner in Wootton Road, Bill Saville aged 4, who still lives in Lee, attended his street party.

In the photograph he is the boy at the front with his shoe in his mouth.

The Hampshire Telegraph reporter wrote that "an amazing feature of these tea parties is the amount and variety of food provided. I have seen plateful upon plateful of sandwiches, cakes and sweet biscuits and bowls of custard, blancmange and fruit salad. A truly wonderful display which must have meant a considerable sacrifice in rations and ration coupons by a large number of people."

For some people though, especially those who had lost loved ones, it was impossible to celebrate. One resident recalled how she hung her Union Jack outside her bedroom window fronting on to the road. "When I went downstairs, I found my younger sister in tears and in distress. Her young Canadian pilot husband had been shot down over France only a month or two previously and she was inconsolable. She had a small baby, now fatherless, and the end of hostilities brought her little comfort. Signs of celebration were more than she could cope with. In my wish to applaud the Allies' hard won victory, I had not thought of the terrible consequences that the war had inflicted which can never be repaired. Our Union Jack was brought in and folded carefully away".

For the children of Lee Junior School, it was not just a special day but a special week. The School Log Book for 7th May records that the "School closes for three days 2 days public holiday for VE Day and 1 day for Ascension (Day)". When the School re-opened at 9am on May 11th it was noted that there was "very low attendance", not surprisingly as it was a Friday!

Official functions continued to be held for about a month after VE Day itself. Lee Tower Ballroom was the venue for two major parties, one hosted by HMS Daedalus civilian personnel and another by the British Legion at which , according to the Hampshire Telegraph, 300 women and children of serving men still abroad were entertained to tea and cakes followed by a concert. A party for 500 children "of very mixed ages" was given by HMS Daedalus during the last week of May. At the end, each child was given a commemorative victory spoon to mark the occasion.